We were very honored to have been chosen as the official supplier of BC Summer Games Participant Lapel Pins.

These pins are awarded to all participants of the games regardless of their final standing results.

The Participant Lapel Pins were made by using a photo etched process with soft enamel fill.

The base material is brass and the plating is polished nickel. 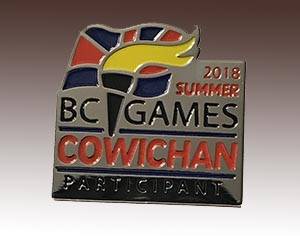 The BC Games were originally a vision of Premier W. R. Bennett who believed in providing “an opportunity to bring all parts of BC together". Large and small communities, in the spirit of sport and friendship.  Mr. Bennett’s vision for the BC Games has provided a substantial foundation and structure, on which excellence in sport, and community has been and continues to be built.

Established in 1977 by the Provincial Government under the Societies Act. The original mandate of the BC Summer and Winter Games Society was to provide an opportunity for all British Colombians to compete in an organised sports festival. That promoted physical fitness, individual achievement, and community pride.  The very first BC Summer Games were held in Penticton in 1978.
With the first BC Winter Games taking place the following year in Kamloops.